The State of Modern Cartography

The application of Geographic Information Sciences (GIS) continues to grow as a global research tool for understanding the world around us. Cartography, the process of making maps, has benefited greatly from advancements in GIS technology in recent years. 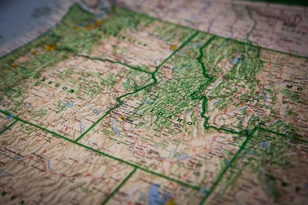 The number of students earning degrees in cartography has risen 40% in the past decade to keep pace with the demands of technology and consumer needs. Modern cartography influences our lives in ways that probably don’t seem obvious to most of us. Services that are simple for users, such as ordering a rideshare from apps like Uber or Lyft, are only possible due to innovations in modern cartography.

At USC, our Master of Science in Geographic Information Science & Technology offers a track for spatial data analysis and visualization, which covers the advanced techniques for creating accurate and engaging maps.

In this article we’ll look at how cartography works in the modern world, and how the tools of cartography have both changed and stayed the same. We’ll also explore some techniques and trends you can follow for the future.

What Is Modern Cartography?

Modern cartography might seem like a contradiction when considering the historical origins of cartography and traditional map-making. However, cartography remains as relevant as it was centuries ago thanks to the advent of GPS, data globalization, and location analytics.

Modern cartography allows GIS professionals to understand everything from climate change to where companies should open businesses. And, the possible applications extend far beyond our own planet. For example, this interactive map shows how new star charts and celestial coordinates can be discovered all through modern cartography techniques.

Modern cartography has led to the creation of numerous digital tools that enhance the accuracy of traditional maps. One example is new technology that addresses color blindness by allowing GIS experts to see what a map looks like to a color-blind individual. Color-coding technology takes the guesswork out of designing maps that are accessible to a larger audience.

Location intelligence is also an integral piece of modern cartography and disaster management. In understanding how to respond to natural disasters, GIS specialists use location analytics to determine evacuation routes for areas impacted by hurricanes. By using digital maps in conjunction with evacuation route data, GIS professionals can overlay evacuation routes across maps of affected cities or keep visualizations up-to-date for much larger regions. The collection of this data began in the early 2000’s to deal with the influx of hurricanes in the United States, and now provides visualizations of clear and safe routes inland.

The goal of marine electronic cartography is to make transportation via bodies of water more efficient than it was in the past with only paper charts Because this area of GIS technology is still growing, there is an increasing need for professionals in the field with an expertise in cartography.

GIS professionals also have the opportunity to go into the commercial or defense markets to put their skills to use. According to Persistence Market Research, demand for marine electronic cartography is expected to increase worldwide meaning international positions will be readily available. The firm expects growth in the following areas through 2026:

Modern cartography is also a great tool in understanding elections. This map collection vividly shows the political contrasts in the United States and breaks down the information in a number of ways. For example, local and federal governments use GIS technology for mapping elections and reaching targeted voter demographics.

One of the key techniques used in modern cartography has its roots in 17th century map-making. Relief shading techniques give dimension and depth to maps so individuals can better understand terrain. GIS specialists can use applications like Photoshop and other digital software to create relief shading online.

For example, this map of Mars uses elevation data that lets visitors explore terrain across the red planet. This interactive map not only implements relief shading, it also uses the essential tool of color-coding to help users understand how Mars might look with bodies of water.

USC students interested in cartography have multiple paths toward enhancing their knowledge. The online M.S. in Geographic Information Science & Technology offers a comprehensive education in advanced GIST techniques, applications and practices, with a specialized track for creating maps and visualizations. Students in the online graduate certificate in GIST program gain a foundation in spatial data acquisition, and they can select cartography and visualization as an elective.

Are you enrolling from outside the U.S.? Click Here.
Where is the GIS Field Headed? Highlights from an Expert Interview → ← The Importance of Geospatial Leadership in a Changing World
Request Brochure Apply Now