What is Geospatial Intelligence?

Geospatial intelligence (GEOINT) has played a pivotal role in military operations and in the broader context of human security for decades. From providing critical intelligence in resolving the Cuban Missile Crisis in 1962 to helping the U.S. facilitate the negotiations that ended the Bosnian War in 1992, GIS military applications have been crucial in ending conflicts that might have otherwise continued for decades longer.

One of the most fascinating aspects of GEOINT, however, is how it has evolved over time and taken advantage of new technologies. In addition to examining what geospatial intelligence is, we wanted to look at GEOINT through a modern lens and examine how governments and other organizations use GIS for GEOINT applications today, as well as some of the developments that have made helped GEOINT evolve, including: 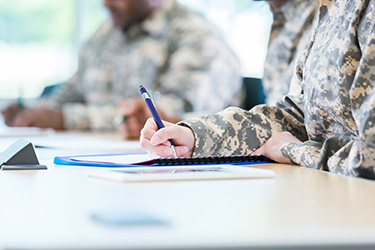 The Next Generation of GIS Intelligence Applications

One of the most significant trends in geospatial intelligence is the shift in creation and ownership of data. As the United States Geospatial Intelligence Foundation noted, new data sources like OpenStreetMap and geotagged social media pictures can be leveraged for vital intelligence. However, the availability and open nature of these platforms also presents challenges for the GEOINT community, which must rely on data it no longer has full ownership and control over.

1. Machine Learning and GEOINT: Managing the Chaos of Natural Disasters

While it may sometimes seem like the entire world is documented, catalogued and analyzed, there are still many permanent and semi-permanent structures that remain unmapped. One of the main barriers to collecting geospatial data has been the manual and time-intensive work involved; this is especially problematic for instances where landscapes and structures change dramatically (i.e. after a natural disaster).

Geospatial intelligence software, augmented with machine learning, could help to map changes in terrain and structures, making disaster response projects more efficient and more effective. Several organizations are looking toward algorithms to help create more timely and accurate maps. One example is the SpaceNet “Road Detection and Routing Challenge,” a $50,000 competition to develop an automated method for extracting information about road networks. Crowdsourced data proved to be an invaluable resource in the response to Hurricane Maria in Puerto Rico, but the successful implementation of machine learning could yield faster and more accurate maps to help emergency personnel find people in need or identify the best routes for delivering supplies.

One of the core challenges in hunger worldwide is the fact that scarcity situations have usually already become dire by the time humanitarian efforts can begin. This is just one of the major challenges that DARPA is hoping to solve through a $7.2 million project awarded to Descartes Labs. The company hopes to create a vast geospatial data repository, leveraging sensors, satellite imagery and data from 75 different partners.

In 2017, the company hosted a hackathon, giving developers the goal of addressing food security issues. The resulting projects included:

Beyond the direct impact of reducing suffering from food shortages, the company suggests that addressing scarcity before it becomes a dire problem could help to avoid conflicts over resources.

The U.S. military has been a long-standing user of GIS intelligence to resolve conflicts, protect troops, assess risks and gain information about enemy operations. While not a new trend, the military has addressed new challenges.

One of the most important shifts in the way the military uses geospatial intelligence was the adoption of the object-based production framework. This philosophy focuses GEOINT around assembling data together around specific issues, rather than tasking analysts with collecting information from many different sources. This way, analysts spend more time developing intelligence and insights rather than with data management.

This approach is especially valuable in multinational joint operations, where data and GIS applications must be interoperable to ensure all stakeholders have access to mission-critical information.

Although the visualizations and analyses provided to emergency responders have drastically improved our ability to respond to events likes hurricanes and other natural disasters, it is just one factor in how GEOINT has evolved. During the response to Hurricane Maria, for example, geospatial data was plentiful but disparate and difficult to use. This led to problems like duplicate deliveries and deliveries that were scheduled, but never made.

One of the developments to arise out of problems like these has been a rise in self-service geospatial intelligence products. For example, FEMA’s GeoPlatform Disasters Portal provides curated geospatial information and datasets from numerous other apps and sources, providing a key data stewardship role. This effectively gives first responders and GEOINT teams a running start in responding to natural disasters.

One of the core themes in all the above GEOINT uses is the vast volume of data. As we look toward the future, the ability to manage data at large volumes will continue to be a key theme. However, it’s important to note that the GEOINT industry will require expertise both in the analysis and in the preparation of that data. As Trajectory Magazine noted, data stewardship is often seen as a peripheral function, but it is critical in today’s GEOINT world, where the number of data sources and variety of data types will grow exponentially.

Are you enrolling from outside the U.S.? Click Here.
The Application of Geographic Information Science in Earth Sciences → ← Geospatial Information and National Security
Request Brochure Apply Now