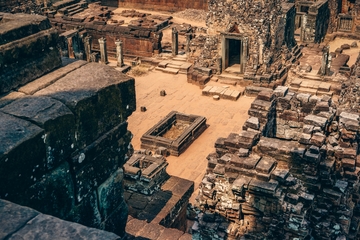 Geographic Information Science (GIS) has made a major impact in fields like the earth sciences and historical research by opening new avenues for discovery and providing a new perspective on the world around us. Archaeologists were among the earliest adopters of GIS, beginning to utilize geospatial technology for projects in the 1980s. Though older software could be challenging to use, GIS mapping was an intuitive fit in a field focused on exploring human history through the recovery of artifacts and architecture.

As geospatial tools become more powerful, GIS archaeology has evolved as well, making it possible to visualize ancient settlements and analyze changes in the use of space over time. Today, researchers harness spatial problem-solving to uncover hidden pieces of history and develop fresh insights into known settlements.

Predicting the Locations of Relevant Sites

Predictive modeling is a vital application for GIS in archaeology. By incorporating historic map data, physical details of an area’s landscape and known information about past inhabitants, archaeologists can accurately predict the positions of sites with cultural, historical or agricultural relevance.

This technique was particularly helpful in an analysis of Arizona’s Santa Cruz County, located near the U.S.-Mexico border. Archaeologists had solid evidence of long-standing populations in this area and were confident they could find additional information if they just knew where to look. Researchers hoped their findings could lead to the sites being designated as National Heritage Areas.

Archaeologists used GIS mapping to bring together information gathered from the AZSITE Arizona archaeological sites database, the U.S. Geological Survey, the Arizona State Land Department and local environmental conditions, such as water sources. They were able to create an archaeological sensitivity map that pinpointed likely locations for ancient settlements both in areas that had been studied in the past and others that had not yet been scrutinized. Guided by geospatial information, the researchers developed and implemented a predictive model that could reliably identify regions of interest.

The passage of time affects even relatively recent heritage sites, but recovery projects can give us a glimpse of a lost way of life by employing remote sensing technologies like Light Detection and Ranging (LiDAR). This technique uses lasers to scan large areas. A beam pans and pulses side to side as it covers the space, collecting information as it goes. With emitters recording between 20,000 to 100,000 points every second, the resulting data can help operators visualize a landscape. Remote sensing in archaeology allows professionals get a preview of the terrain, including obstructions and landmarks, before physically entering the area.

For example, during the European migration movements to the U.S. of the 1700s, settlers constructed homes and farmed the land of New England. By the 1950s, some of these areas of Connecticut and Massachusetts were ghost towns. Over the years, vegetation reclaimed the land and largely erased the impact that early subsistence farmers had on the region.

Researchers used LiDAR mapping to identify anomalies in the forest floor, which led them to building foundations and stone walls that once served as the basis of a community. Advances in LiDAR technology allowed users to review one-meter resolution images and identify previously abandoned structures. Few people, if any, knew these foundations and walls existed. With the help of LiDAR archaeology, researchers were able to uncover a piece of New England’s history.

GIS archaeology not only uncovers previously overlooked historic and cultural sites, but it can also offer new context for well-known research areas. Putting already-gathered information into a new context can give professionals new insight into the reasons for a civilization to settle where they did or provide new potential explanations for their migration patterns.

The Maya once populated present-day Belize, Guatemala, El Salvador, Honduras and Mexico, thriving between 1700 BC and 200 AD. Proximity to water was a critical element in choosing a location to settle and build permanent villages, particularly considering their reliance on successful agriculture for survival.

Researchers set out to gain a greater understanding of the complex civilization the Maya created and the reasoning behind the locations they selected and the structures they built. They used GIS to review previously collected data, including:

The researchers noticed that in some areas, the Maya had constructed water-storage reservoirs called chultunes, while large clusters of villages primarily relied on wells. Further analysis showed that, in areas where wells were most common, the water table was notably higher, reaching between approximately 60 and 100 feet below the ground. Outside these clusters, the chultunes were much more prominent. However, observers saw that architectural structures were never more than about one-third of a mile away from the chultunes, suggesting that the Maya had determined this to be the maximum distance anyone should carry pots of water.

Are you enrolling from outside the U.S.? Click Here.
The Relationship Between GIS and Marketing → ← All About 3D GIS
Request Brochure Apply Now