The Evolution of GIS

The history of using geographic information to better understand and solve complex problems can be traced all the way back to the 19th century. In 1832, French geographer Charles Picquet used various color gradients on a map of Paris to represent the number of deaths by cholera, making an early contribution to the development of epidemiology. Twenty-two years later, English physician John Snow took this concept a step further and demonstrated the problem-solving potential of maps by identifying the connection between an outbreak of cholera in London and a contaminated water supply.

Today, geographic information science (GIS) has applications ranging from strategizing public health initiatives to selecting sites for archaeological digs. Over the history of GIS, researchers, programmers and analysts have continued to innovate, developing fresh perspectives and technological breakthrough. Their efforts resulted in the versatile tools and methods that empower projects for a wide variety of organizations.

Examining the evolution of GIS reveals how experts in many different fields discovered the value of spatial reasoning. Advances in areas like open-source mapping and augmented reality mean that geographic data will only become more important in our daily lives.

The Early Years of GIS

GIS emerged as a distinct discipline in the 1960s with Roger Tomlinson’s pioneering efforts for Canada’s Department of Forestry and Rural Development. Tomlinson was tasked with creating a map-based inventory of the nation’s natural resources. In collaboration with IBM programmers, he developed automated processes to collate data from all of Canada’s provinces. 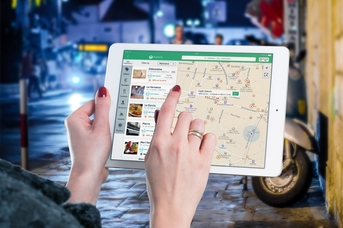 As Tomlinson’s team developed CGIS, other innovators were also at work, such as Howard T. Fisher. Fisher developed a prototype for one of the first mapping software programs, Symap, at Northwestern University in 1964. He went on to establish the Harvard Graduate School of Design’s Laboratory for Computer Graphics and Spatial Analysis in 1965. The LCGSA led the way in developing techniques for managing, synthesizing, analyzing and visualizing spatial information that enabled increasingly robust applications for GIS.

Over the decades following the invention of GIS, programmers and researchers expanded the boundaries of geospatial data collection and problem-solving. Advances in digital tools for gathering, visualizing and analyzing spatial information opened new possibilities for organizations in both the public and private sectors.

Esri is one company that has played a key role in these shifts since its 1969 founding as Environmental Systems Research Institute. The Redlands, California-based firm initially specialized in using GIS to guide consultation services for land-use planning and resources management.

After years of refining those methods, Esri debuted the first commercially available geographic information system, ARC/INFO in 1981. This software package provided users with a database and a set of tools for the input, processing and output of spatial information. Building off that initial platform cemented Esri’s place as the world’s largest GIS firm, even as an array of alternatives appeared on the market.

The evolution of GIS continues, as geospatial systems have transformed along with the increasing power of computers and growing data storage capacity. Tools and techniques are now constantly refined to serve purposes such as urban planning, disaster response, market research, resource management and military operations. Remote sensing makes it possible to collect geographic data from remote areas of the world and even from space.

Robust GIS tools allow organizations to organize and share complex information in ways that users can easily understand. Manufacturers and retailers can use their findings to create more efficient supply chains, while health departments can make better-informed decisions about distributing limited resources. With open-source mapping and web-based tools, anyone can get involved in generating data on traffic patterns or the path of a dangerous storm.

Creative problem-solvers will continue to push the boundaries of geospatial thinking in the years ahead. Some of the most promising areas for future development in GIS include:

Related Content: Predictions for the GIS Industry in 2019: Opportunities, Technologies and Students

Are you enrolling from outside the U.S.? Click Here.
4 Ways GIS Can Help Fight Drug Epidemics → ← GIS in the Field of Public Health
Request Brochure Apply Now