How Mapping Is Used by NASA & Applications of GIS in Space

When we think of the tools involved in exploring outer space, images of astronauts collecting mineral samples on the moon may come to mind. However, scientists also depend on more remote methods to deepen our knowledge of the solar system and the universe beyond, like those offered by geographic information science (GIS). GIS space exploration has become a crucial part of how NASA gets to know the features of other worlds, develops our broader understanding of geophysics and gathers valuable information about our own planet.

The wide array of GIS uses and applications include enormous possibilities for applying spatial data to make discoveries and solve problems. Geographic Information Science and Technology (GIST) enables powerful insights into the development of urban cities, the geography of forests and even phenomena throughout the observable universe. With skilled experts at NASA and other organizations guiding GIST strategies and software, we can continue to learn more about our planet and the universe.

Getting to know the planets and objects in our solar system requires advanced systems for observation and extensive analysis. The more information that researchers have concerning the features of these surfaces, the better we can understand their origins and how they have changed over time. Advances in GIST enable more accurate mapping of planets and other celestial bodies than ever before possible, turning the data and images that satellites and rovers send back into a wealth of spatial information. 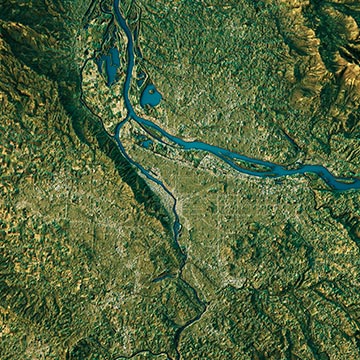 Although no astronaut has yet set foot on Martian soil, scientists have become highly familiar with the terrain’s features, thanks in large part to GIS. 2001 Mars Odyssey, the robotic spacecraft that has orbited Mars since October of that year, provides spatial data on the planet’s surface. As part of its mission to explore the red planet and locate any signs that it may have once supported life, the orbiter collects geological details and transmits images of surface minerals for more extensive analysis.

To accomplish these objectives, NASA equipped the Odyssey with a camera called the Thermal Emission Imaging System (THEMIS). This system maps the surface, both capturing images in the visible spectrum and detecting thermal energy in wavelengths that are undetectable by the human eye. As a result, scientists were able to generate a detailed model of the planet, learning about many different types of rocks found there and the effects of tectonic activity on the surface. By applying GIS techniques to the details that NASA has collected, experts can find the most productive paths for Mars rovers and potentially a future manned mission.

Venturing to the Edge of the Solar System

NASA further enhanced our perspective on the solar system through the New Horizons mission launched in January 2006. The probe visited Jupiter before carrying on toward the solar system’s outskirts, where it completed its primary mission of observing Pluto in 2015. The Long-Range Reconnaissance Imager (LORRI) and the Multispectral Visible Imaging Camera (MVIC) onboard garnered an unprecedented close-up look at the dwarf planet and its moons before the probe moved on to examine more of the Kuiper Belt, a massive collection of icy objects with a history that traces back to the formation of the solar system.

Planetary maps and mosaics generated from the spatial information gathered from these efforts build our understanding of the geology, topology and geography of distant objects in space. The U.S. Geological Survey’s Astrogeology Science Center offers access to the images and data collected by various missions, including New Horizons, for use by researchers and the public. The database features visuals from our moon, Mars, Pluto, Saturn, Mercury and more, with the compatibility to use GIS software for further analysis.

Mapping from Space to Solve Problems on Earth

NASA’s organizational goals are not restricted to answering questions about space. The agency also channels its technology and expertise to confront pressing issues here on Earth, and GIS has an important role to play in several of these initiatives. GIS analysts at NASA may be tasked with projects such as:

The GIS team at NASA Langley Research Center uses spatial data to perform surveys and measure flood impact, locating flooded buildings and drawing historical comparisons. They also work toward helping the agency function more efficiently and responsibly. GIS tools reveal how to utilize the available area in facilities more effectively and assist in planning relocations. The team continues to create tools for monitoring the construction and maintenance of buildings, as well as managing cultural resources on the grounds of NASA centers.

For those who want to use GIS mapping in their own research, the NASA Center for Climate Simulation released a Spatial Analytics Platform. Some of the applications for this tool’s analytics and data management capabilities include:

Are you enrolling from outside the U.S.? Click Here.
How GIS Has Evolved in the Digital Age → ← Q&A with U.S. Navy Pilot Kyle Weaver
Request Brochure Apply Now