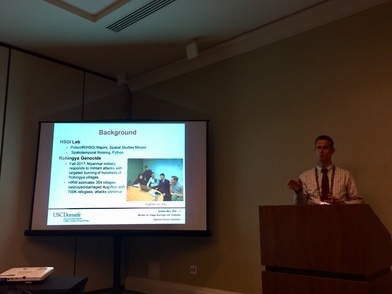 From September 28 through October 2, the Urban and Regional Information Systems Association (URISA) welcomed geographic information science (GIS) professionals, researchers and students to New Orleans for the 2019 edition of the annual GIS-Pro conference. The agenda included breakout sessions, workshops and opportunities for networking.

Participants in the GIS-Pro conference saw how a passion for spatial problem-solving can advance their careers and expand knowledge in a variety of areas from community health to election management.

Students, administrators and faculty members from the University of Southern California’s Spatial Sciences Institute participated in events where they shared their work and built connections with the international GIS community. Representatives from USC discussed humanitarian applications for remote sensing, how students can plan to make the most of their graduate GIS education and strategies for seeking a job in the field.

As part of a panel titled “From Poverty Alleviation to Burning Villages: Using Spatial Analysis for Social Justice,” Andrew J. Marx, an associate professor of the practice of spatial sciences at USC, presented research that shows how geospatial methods can be harnessed to address humanitarian crises. Marx shared findings from a case study on using small satellites to monitor village burnings in Myanmar’s northern Rakhine State, a site of widespread violence against the Southeast Asian country’s Rohingya minority.

Published in the journal Remote Sensing Applications: Society and Environment, the study offers evidence that smallsats are an effective means to track and collect intelligence about these crimes. Marx and his coauthors, Richard Windisch and Jong Su Kim—with assistance from USC students—set out to establish an approach that’s less expensive than relying on high-resolution imaging from commercial satellites and can work even when atmospheric conditions are less than ideal.

“We’re trying to empower workers to adopt these new technologies in their fight to preserve human rights,” Marx explained.

The study drew on a database of destroyed villages provided by the international non-governmental organization Human Rights Watch and high-cadence smallsat imagery from the San Francisco-based Earth-imaging company Planet. Planet has over 150 satellites in near-Earth orbit, including the Dove constellation of 88 smallsats. The Doves produce three-meter multispectral images, including a near-infrared band that can reveal the destruction of plant cells.

A script programmed in Python, a programming language that’s commonly used for GIS applications, extracted data from smallsat images, and the researchers created an algorithm that seeks out precipitous drops in the amount of dead plant material, which is often used for roofs in Myanmar villages.. As a result, it was possible to remotely sense indications of arson and document possible human rights violations with a high level of accuracy, even in regions that are difficult to access. In turn, findings like these could trigger investigations, serve as evidence in international courts and support refugees’ applications for asylum.

According to Marx, the study produced important outcomes in two ways:

“I was able to train several students on how to use two emerging technologies—Python and smallsats—to address something they were passionate about, which is preserving human rights,” he said. “The other result is that we’re able to publish peer-reviewed research, which demonstrates to the human rights community how they can use this kind of methodology.”

Gis-Pro attendees received advice and input about taking the next steps toward their career goals and were able to talk to some of the top thinkers in spatial sciences. Marx noted that involving students in professionally focused discussions can be a powerful means of exposing them to the field’s potential outside of an academic context.

“A lot of our students go on to work in industry or for municipal or state government,” Marx said. “This conference gave them the chance to interact with professional GIS folks and see what they want out of the people they’re hiring right now.”

USC faculty members participated in several events designed to help GIS students and new professionals plan for their futures. Academic Programs Director Ken Watson moderated a panel called “Thinking About Grad School?” that focused on choosing an advanced GIS or geospatial intelligence degree program and getting the greatest value out of your education.

Susan Kamei, the managing director of the Spatial Sciences Institute, offered input on resumes during an interactive session and moderated a panel for young professionals trying to find their competitive edge on the job market. She also led a discussion on “Engaging GIS Professionals in the Community” that looked at how GIS practitioners and faculty get students at all levels involved in spatial thinking.

In addition, Kamei took on a new role when the URISA membership elected her to the Board of Directors for a three-year term. The board consists of 12 volunteers who govern the organization and plan future conferences.

GIS is reshaping how leaders make decisions in businesses, nonprofit organizations, government agencies and the military. In New Orleans, the diversity and power of GIS tools and methods were on full display. USC’s online GIS and geospatial intelligence programs allow students to capture these possibilities, developing the skills in spatial thinking, programming, analysis and visualization that they need to progress toward their goals.

Are you enrolling from outside the U.S.? Click Here.
Your Guide to Professional Graduate GIS Certifications → ← The Application of GIS Technology for Nonprofit Organizations
Request Brochure Apply Now