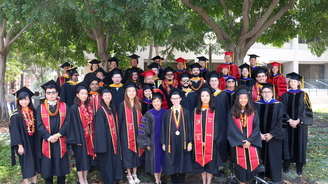 Minority college students who major in the STEM fields – science, technology, engineering and math – earn at least 25 percent more than their peers who study humanities or education, according to the results of a new USC study.

And those who took jobs related to their STEM degrees earned at least 50 percent more than their classmates who majored in humanities or education fields.

Published in Research in Higher Education, the study followed more than 1,000 Asian and Pacific Islander, Latino and black students over nine years. The students were scholarship applicants for the Gates Millennium Scholars program funded by the Bill & Melinda Gates Foundation, which awards grants to highly motivated, low-income minority students.

While minority groups continue to be underrepresented in the STEM fields, the study’s researchers believe this will change if students understand how much more money can be earned in those fields.

“The premiums for majoring in STEM fields are huge,” said lead author Tatiana Melguizo, associate professor of education at the USC Rossier School of Education. “We need to educate students that if they get a job in a STEM-related occupation, they have an even higher earning premium. Otherwise, students are not reaping the economic benefit of all the hard work they went through as undergrads.”

Latinos majoring in STEM fields also reported the highest earnings among the groups studied: an average of $56,875 per year, higher than the reported average salaries of $39,365 for blacks and $47,530 for Asian-Pacific Islanders.

The study’s authors said more research must be done to determine whether these discrepancies are attributable to different career preferences among racial and ethnic groups or employers’ hiring decisions, as well as the role colleges and universities play in the career and occupational development of minority students.

“Among the high-achieving minority students we studied, Latinos not only reported the highest annual earnings overall but also reported the highest annual earnings among STEM majors,” said study co-author Gregory Wolniak, a senior research scientist at the independent research organization NORC at the University of Chicago. “Preliminary findings suggest this may partially be due to Latino students’ ability to find jobs related to their major. These findings are encouraging signs that strengthening the pipeline of underrepresented students into STEM careers offers a viable solution to our nation’s growing competitiveness problem in engineering and science fields.”

Funding for the study was provided by the Bill & Melinda Gates Foundation through the Institute for Higher Education Policy.

Are you enrolling from outside the U.S.? Click Here.
Here’s Why It’s A Great Time to be in Geospatial Intelligence → ← GIS and Cybersecurity
Request Brochure Apply Now